ROYAL TAR, wooden barque:
When bound from Auckland to Kaipara, in ballast, the barque struck on Shearer Rock, Hauraki Gulf, early on the morning of 26 November 1901, and became a total loss. The officers of the steamer Ngunguru, when passing, saw the barque sending up signal rockets, and proceeded to render assistance. Before she came alongside, the Royal Tar slipped off the rock and sank in deep water. The crew of the barque were picked up from her two boats. The Royal Tar left Auckland on the evening of the 25th, but instead of following the usual passage the master went outside Tiritiri Island in order to save beating to windward, the wind being light, between east and south. At midnight the vessel was put on a NE course, running before a light wind. It was in the second mate’s watch, at 1.30am, and the barque was sailing at from four to five knots, when she struck Shearer Rock, 41½ miles north of Tiritiri. The master expected the course set at midnight to carry the vessel well clear of the rock. The captain attributed the mishap to the influence of very strong tides. The Royal Tar at once began to fill and settle. Two lifeboats and a dinghy were launched, and the captain’s wife, their infant son, and most of the crew embarked in them. The captain, mate and two seamen remained on board. Twenty minutes after the ship struck the holds were full of water, and the cabin on the deck was soon flooded. The master and one man had to jump overboard, and were taken into the remaining boat, the painter of which had to be hurriedly cut to avoid it being drawn down by the sinking barque. Just before the Royal Tar sank the mate went to his cabin to secure his personal property. Before he could return the barque listed and sank. The inrush of water forced the roof off the cabin. The vessel sank until the top-gallant masts only were visible, and the mate was drowned.
The Royal Tar, No. 74,960, 598 tons register, built at Nambucca River, NSW, in 1876, by W. Marshall. Length 171.2ft., beam 31.4ft., depth 17.2ft. Owned by J.J. Craig, of Auckland, and commanded by Captain Finlay Morrison. The crew numbered 15 all told, including two apprentices. The barque was chartered in the 1890s to convey members of the New Australian Party to Paraguay. 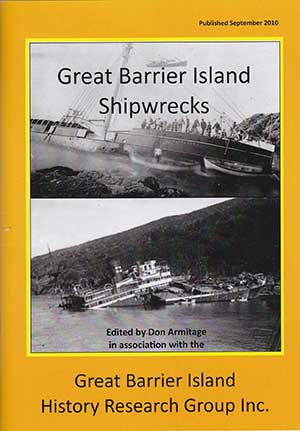